The books on this site are available to download and use for your personal or class studies.
You may not change the content in any way or sell the books.

Permission is granted to print and make copies without changes for home and classroom use, but not for selling.

THE QUEST
“TO LOVE LIFE AND SEE GOOD DAYS”

The quest of all men: "to love life and see good days"!

Want to be happy, and get the most out of life? This book will guide you to your goal in easy step by step instructions, while entertaining you with many interesting scientific and historical facts! 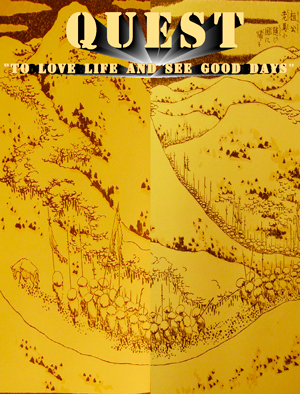 You will strengthen the firm foundation of your own faith and "always be prepared to give an answer to everyne who asks you to give the reason for the hope that you have." 1 Peter 3:15b

Volume I 1574 - 1906
Our American tale began in the year 1574 with the birth of an English boy named William Mays: (or as it is sometimes written Mease, or Mayes). His father was of Dutch heritage, the roots of which we shall not take time to examine now, for this adventure is bound for
America. I do not know, nor do I care to speculate, as to how or why William chose to become a preacher, but that was his profession. By the events that would begin to unfold in this young man’s life, we can know, with some certainty, that he was of a bold and adventuresome spirit.

These were times of great explorations and colonization as all Europe, and especially England, sought to expand its influence and power in the “New World”. The Virginia Company of England was organized in 1606 for the express purpose of
establishing a colony in this “New World”, which we call America. On December 19th, 1606, three small ships set sail on this bold new venture. Filled with great expectations of power and wealth, they entered the James River on April 26th , 1607: continuing up-river for about fifty miles from the mouth, they settled on a site which they named Jamestown in honor of their King, James I of England.

Replicas of these three ships have been constructed and are open to the public at the sight of the Jamestown settlement in Virginia. I have walked about on these ships, and can personally say that “small” is not an adequate term to apply to these vessels when contemplating an Atlantic crossing. On my boldest day, I would not venture beyond sight of land on such a small and fragile craft.