Being the son of an Army officer, Jim spent his early life living in many places.The last place his father was stationed before retirement was Japan. Jim found living there to be a great adventure and enjoyed many perks because of his father’s rank. Living in a palatial home and taking riding lessons on the Palace grounds on the grandson of Man of War to name a few. 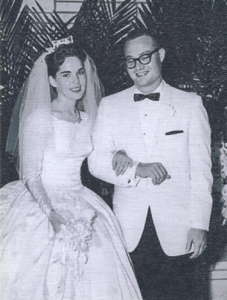 The first time I saw him he was coming out of the little country store and I immediately decided he was the guy for me. He was 17 and I was not yet 16. We started dating two days after my 16th birthday and knew immediately we wanted to spend our lives together. People would probably say we were soul mates but Jim’s mother would say we had “the magic”. The magic died in the very early hours of June 2, 2012 when the angels came and took him from our arms.

I was a member of the church when we met and Jim started attending with me some of the time, but more importantly, he started studying his bible. The next year he started attending University of Florida (graduating in 1961). When he was there he would attend services regularly but didn’t obey the gospel until about a month before we were married in 1960. At the end of an evening service he went forward and said, “I believe Jesus is the Son of God and I want to be baptized for the remission of my sins.” The preacher was speechless and said he had never had that happen before (he always had to ask the questions and the person just affirm them.)

From that moment on he was fully committed to the Lord and never missed a service unless it was completely necessary.

He was a quiet shy man so he didn’t seek out leading in the Church, but as time went along, he first was called on to deliver an occasional sermon—then he was drafted to also teach the adult bible study which he did for the biggest part of his life.These studies you can study are the result of all those years of teaching. Jim had the ability to unravel difficult passages and translate them into simple language we all can understand. He had a wonderful command of the English language but never tried to make his speech scholarly, instead he worked to make each lesson as easy to understand as possible.

I’m reminded of a time when we were having a Gospel Meeting with one of the prominent teachers from Florida College. The men didn’t ask him to teach the bible class and he was puzzled about that until he sat through Jim’s class then he spread the word about how wowed he was even saying to his buddies, “They don’t need me—they have Jim”

Life was not easy for Jim. His only son and namesake was born mentally and physically handicapped. (two years later we were blessed with a wonderful daughter, then 30 years ago the Lord sent us another “daughter” who has also been a blessing.)

A couple things he loved to do was carve wood and play the banjo. He developed what is called “worker hands” which prevented him from doing either.

Then even though a non smoker, he developed vocal chord cancer and underwent surgery and radiation and was assured there was a 95% cure rate. Well, he fell into the 5% and after about 20 procedures and operations and more radiation, finally went to Paradise. 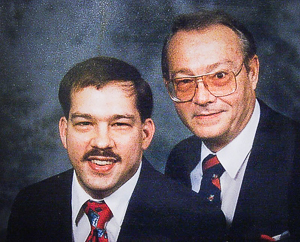 Through it all, he never complained even once, and the last time he was able to go to church he had typed on his voice machine a string of scriptures that began and ended with “This is a day the Lord has made, I will rejoice and be glad in it”, to play for the members. Not only could he not speak, he was also on a feeding tube. Right up until a few hours before he left, he took his bible and tried to search the scriptures. The cancer had gone to his brain making it impossible but he was still trying.